In September I had the opportunity to travel to Denmark and Sweden with my wife as she presented her research at an international conference.
I took the time to educate myself on local turfgrass management while my wife was busy.
Denmark has strict regulation on inputs allowed on golf courses as compared to our country; because of these strict regulations there is obvious blemishes.  These flaws in surface life would be considered unexceptable at many clubs found in the US yet the playability was wonderful with no negative effect on the game of golf.
After studying these conditions and playing on them with local golf enthusiasts I now have an even stronger negative opinion of the 'perfection' image some believe this great game must achieve.
As long as Natural flaws do not negatively impact the game of golf they should not be managed to extinction.  Weeds scattered with in the fairways turf has no impact on playability and only add texture to the surface.  Dry patches add length to a golf shot and a point of reference while locating a shot.  Those two areas in general are over managed in our country and that does nothing but drive up the expense of the game.  A lot can be learned by traveling over seas and playing golf on a course that is managed as intended; at one with Mother Nature. 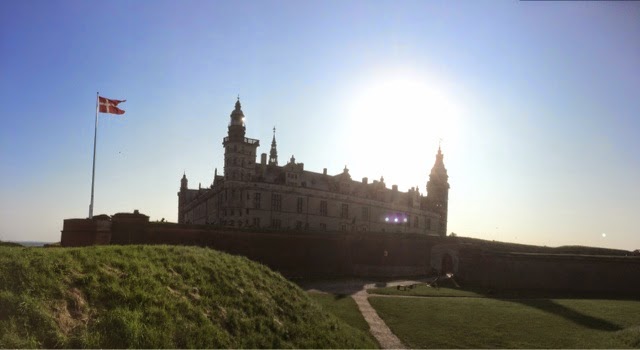 Castle on the Sea 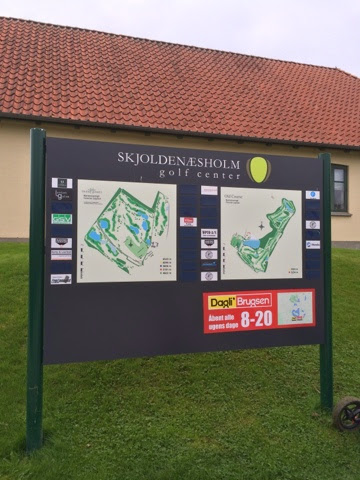 One of the courses that I had the opportunity to play with some local folks. 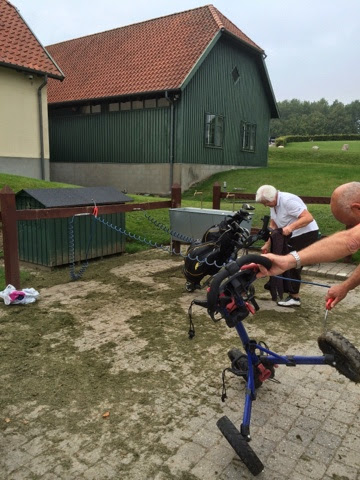 Everyone walks in Denmark.  Golf is a physical activity and a form of great exercise.  Even old men and women walk the course while playing; our country needs a big wake up call in this area.
The courses have compressed air blow off stations next to the parking lots so players can clean off after early morning rounds or on damp days. 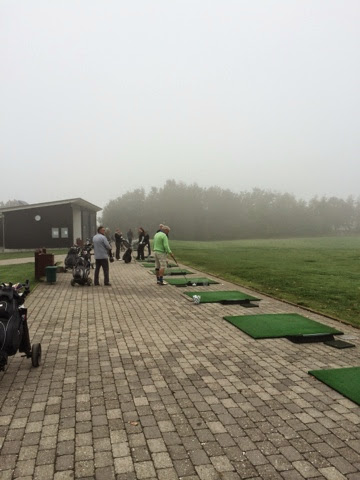 Practice areas are all built utilizing artificial mats to reduce wear and maintenance of a practice centers.  Each golfer actually carries their own rubber tees in their golf bags to use on the artificial mats.  When I asked about this I was told by an elderly man "Why would I want to pay someone to fill thousands of divots a day on the practice area when mats are available."
Case and point taken :) 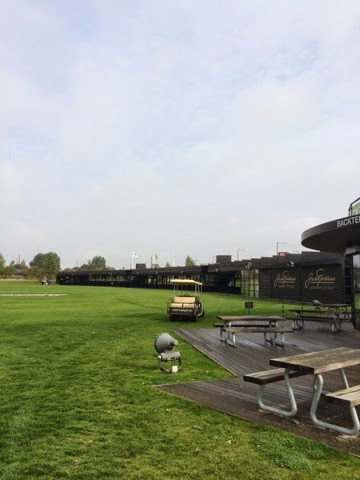 Even the Royal Copenhagen Golf Club had nothing but artificial mats as a practice option.  This double decker facility can be used rain or shine. 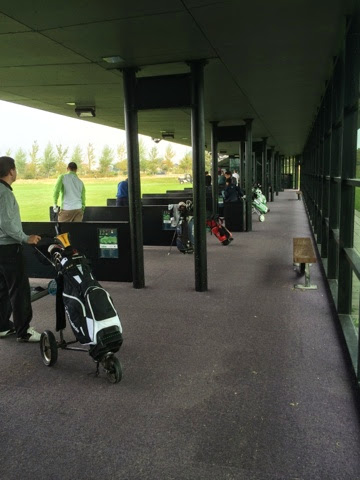 Raining this day so all practice was being completed on the lower level. 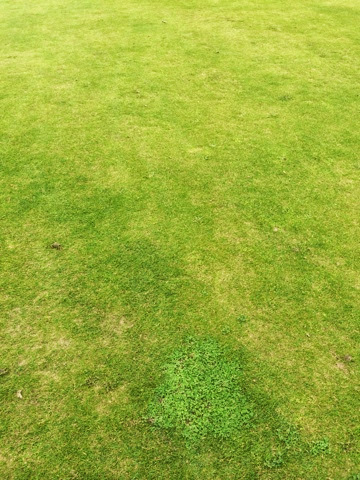 Fine fescue was the predominate species of turfgrass planted on the entire golf courses I was playing.  Fairways, Tees, Rough and even the greens were fine fescue; although the green did have creeping bentgrass within the mix.
A clover patch is seen above growing in the fairway, it does not impact playability. 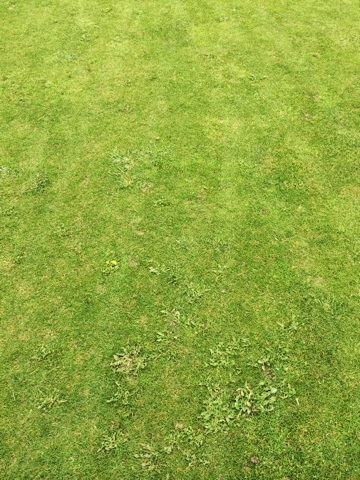 Dandelions also grow within the fairway turf of Denmark. 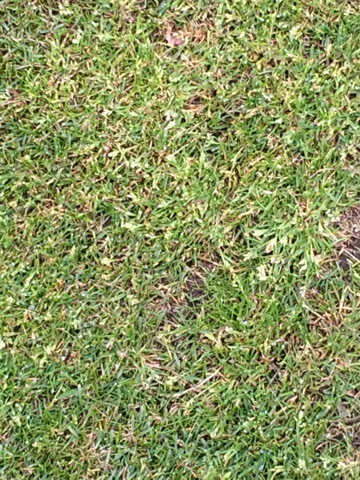 Poa annua can be found in the low areas of the fairways that stay wet when compared to the rest of the surface. 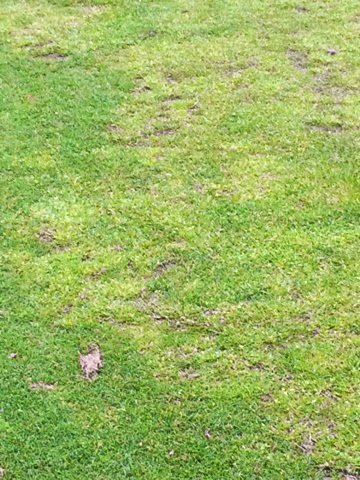 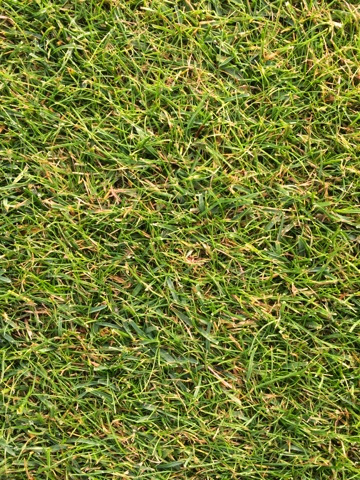 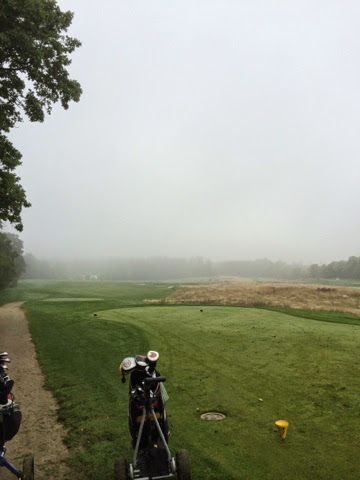 A great day to play a round fog followed by drizzle. 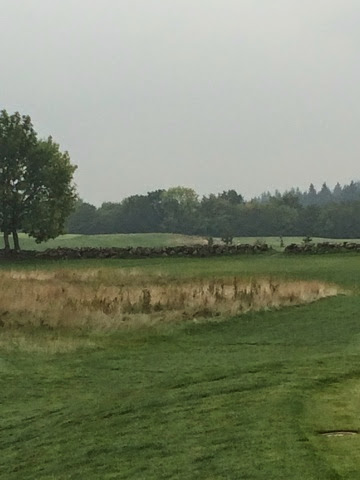 An old field stone fence row erected hundreds of years ago could not be moved while building the course because it once belonged to the King.  The fence is now a part of the course and becomes a hazard to avoid on several holes. 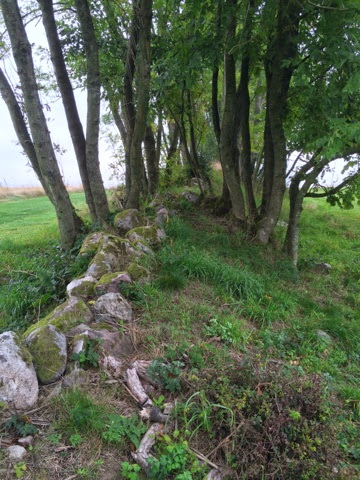 The old fence row again, it is a very interesting design element. 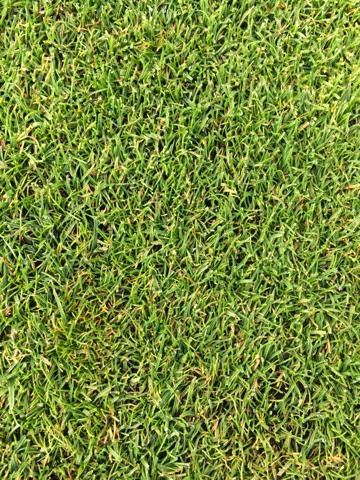 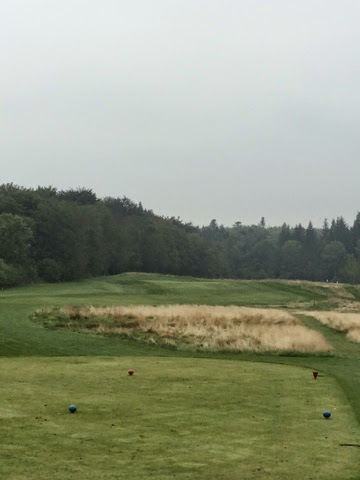 Minimalist design and minimalist management at its finest . 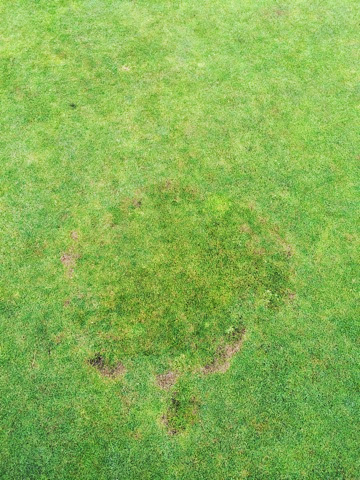 Take-all patch was on fire on many of the green surfaces but it did not negatively effect ball roll when compared to the roll on the rest of the putting surface; which was not fast but it was very firm and true. 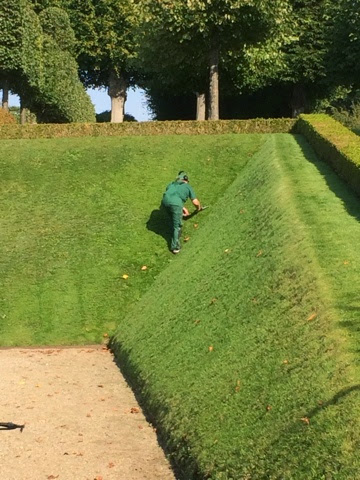 Some extreme turfgrass management taking place at the gardens of Frederiksborg Castle.  These extreme geometric banks have been hand cut for hundreds of years. 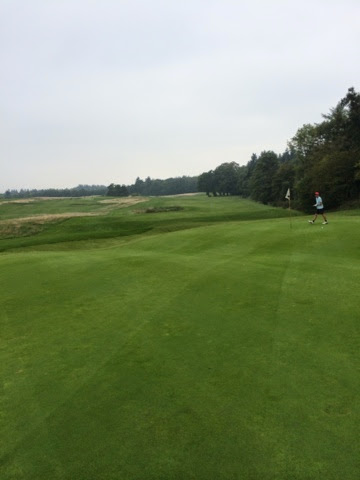 Triplexed putting surfaces with lots of movement and interest made for a very enjoyable rounds .  The speed did not matter because the firm surfaces rolled true and consistent from green to green.
Posted by Craig Moore at 3:03 PM