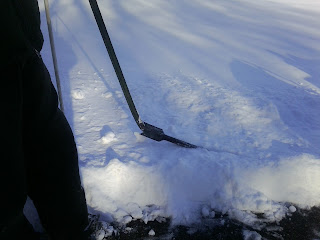 The wind was so strong last week it actually bent some of our metal snow fence poles about 70 degrees.  We were able to bend several of them straight but others we had to cut off the lower bent section.

We will finish the last repair on number 18 Heritage toady. 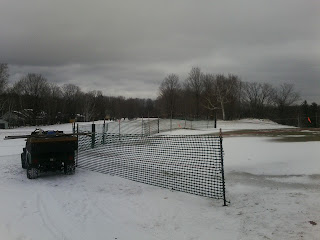 Repairs complete
Posted by Craig Moore at 8:25 AM No comments: 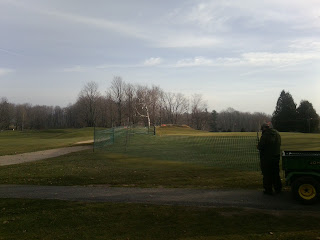 The snow fence was finalized on Wednesday in our strategic locations before the snow came on Thursday night.  The high winds on Friday already took some of it down so we will be out today making the repairs.
We also worked late to get the shop water line winterized before the colder temperatures settled over our area.  Snow cover until spring would be perfect.

Posted by Craig Moore at 9:22 AM No comments:

Taking advantage of the weather 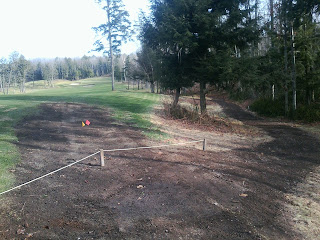 We re-routed cart traffic entering the fairway on #12 Greywalls.  If left for another season the bare area would have been pushed into the fairway itself.  We will now direct traffic to the right and provide several locations to enter the fairway.  We will now have options available to spread out the wear and provide recovery time to the turf.  Vegetation was removed, the ground was smoothed out and a gravel mix was laid down.  The beat down and worn out area was filled with topsoil and seeded.
We have a worse situation on number 13 by the green.  The solution there is a path into the woods.  Something we will look into more during the 2013 season.
A reminder to everyone.....slow down in those carts, this is a golf course not a race course. 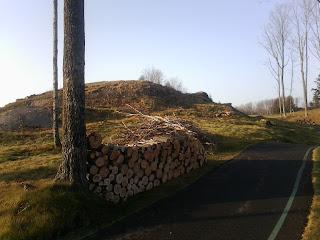 We removed around 15 maple trees behind number 8 Tee and several more behind number 8 green that were in serious decline and losing branches weekly.  We have around 20 more trees in this high traffic area that need to be removed.
Posted by Craig Moore at 2:32 PM No comments: 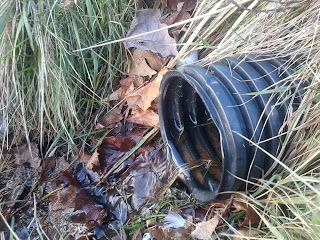 This is a picture of the outlet drain tile on #2 Heritage, the drain was installed in 2011.  This season was proof that it is working very well, number 2 fairway is now much drier after snow melt and a heavy rain.
We are blessed with good soils that drain very well but there are still several areas on both golf courses that would benefit from added drain tile work. 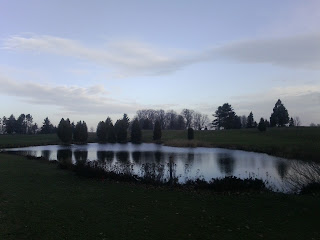 Pond Management
Years ago Algae growth became a major issue in the Heritage irrigation pond and peaked out around 2003.  At that time an errant ball entering the pond stayed on top of the surface held in place by a surface algae mat.  This was an unpleasant situation; it became even more of an issue when we had to complete weekly irrigation intake pipe removal and cleaning as the algae growth was clogging the screens.
A solution had to be found and we wanted the solution to be as environmentally friendly as possible.
As you can tell by our current 2012 pond conditions it is working.
-Several changes to the fertilizer application, timings and rates were made and a buffer zone was allowed to grow around the pond edge.
-Physical removal of algae on the banks is completed in the spring.
-Monthly applications of several bacteria strains are made.  One bacteria strain out competes the algae for nutrients in the water and the other strain feeds on the dying algae.
In 2011 we had a revival of the algae towards the end of the season.  I feel the excessive growth was caused by an increased nutrient load from our ability to use more Orianna creek water than before to fill the pond (because of improvement we made to our retention area).  We were able to combat that problem in 2012 with the additional use of an Eco-sock.  The Eco-socks contain the same bacteria as used before but provides a consistent slower release of the bacteria strains.
As pictured above one can see that our environmentally friendly management continues to work in our favor!
Posted by Craig Moore at 2:16 PM 1 comment: 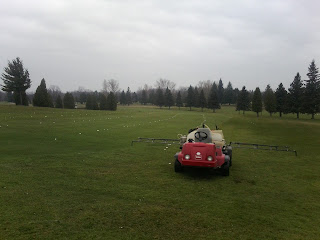 All of our protective fungicide applications are now complete.  It always feels good to have that finished this time of year.  I work around mother nature's schedule when making these critical applications, many times I spray well into the night.  Climatic conditions must be proper; light/no winds with no rain so the product can dry and be taken up by the plant.  This time of year those conditions can be rare.

Pictured above is our spray-pro 1250.  This is my most important tool in the shed.  It is a very accurate rig that I use year round to fertilize - apply wetting agents - apply growth regulators - and apply pesticides when needed.  We purchased this unit in 2006 and it just turned 1000 hours while cleaning and winterizing it this afternoon.  This unit probably has played the biggest roll is the improved conditions of our golf courses over the last 7 years.
This is our only usable spray-rig for all 36 holes.  The 175 gallon tank is perfect for maintaining small acreage areas like greens-tees-approaches but it is under sized for fairway applications.
One day I hope we can purchase a 300 gallons spray-rig and build a better mixing site.  Regular spray applications of nutrients during the season is much more efficient and would reduce product use plus turf conditions would improve with the addition of a wetting agent and growth regulators to the tank.
Posted by Craig Moore at 3:28 PM No comments:

With Sandy coming in last week and giving us mega winds with rain I fell behind on my winter fungicide applications.  I am playing catch up this week to get the Heritage course protected for the months of winter ahead.  I have to finish the fairway applications next.
The Greywalls course has been winterize.  The greens will be roped off today then the only thing left will be putting snow fence around the putting green.  I will have one more staff member left next week on Greywalls and I hope to finish up the washout  repair work left after Sandy screamed through.
Winter is on its way.
Posted by Craig Moore at 6:52 AM No comments: