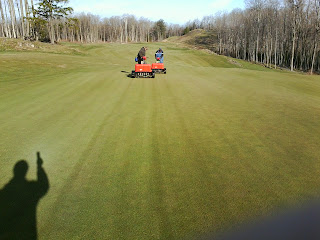 I held an orientation on Monday for all of our new grounds staff members who will be starting in the next few weeks.  It went very well, I feel we have a solid group of new guys ready to learn the job.
We started to solid tine the GW greens yesterday (picture above), it was our goal to finish up the last five greens today but this mornings lake effect snow storm has put a damper on that idea.
Posted by Craig Moore at 8:06 AM No comments:

We were able to make repairs this week on the Greywalls irrigation system.  After start-up and a system audit we found one broken head (pictured above), one unresponsive decoder, one broken tee zone valve and one dead valve solenoid.  We also have a list of irrigation head angle adjustments that will be made in the coming weeks.
Posted by Craig Moore at 7:53 AM No comments: 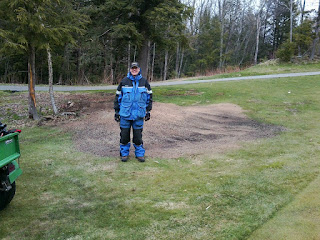 Thill is proud of his work......
We put the finishing touches on the hole where the trees were to the right of #4 green on GW. The area was backfilled, tamped, graded, seeded, fertilized and raked. We will rope it off from traffic for the next few months, by then it should be grown in and ready for play.

Posted by Craig Moore at 3:27 PM No comments: 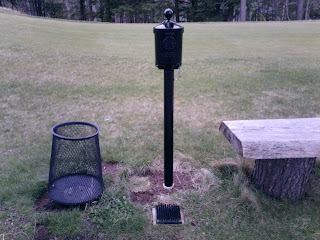 The wooden mounts for the ballwashers and shoe brushes had to be discarded because of rot. We decided not to make anymore because we also had an issue with them tipping over. A 2 inch piece of beveled end pvc pipe fit snug over the end of the ballwasher pipe, we cut the pvc to 12 inch lengths and cemented those in the ground. The shoe brushes were mounted on treated 6x6 sections and then place in the ground in front of every ballwasher.
Posted by Craig Moore at 3:13 PM No comments:

With the crap weather that rolled in the last few days I have a little time to write a quick update on the activities of your grounds crew the last few weeks.
The Heritage
We have been running the Heritage with a three man crew the last few weeks. Slow growing turf, from cold frosty nights, has allowed us time to get the finishing touches of spring clean-up done without having to mow on a regular basis.
-Cups are being cut as needed based on the amount of daily rounds and turf wear, as recovery is very minimal this time of year.
-Greens are being mowed every three to four days based on weather and temperature. We are mowing approaches, fairways and tees once a week. These mowing frequencies will increase as temperatures rise and consistent growth begins.
-Tee markers will be put out next week when we get a few more staff members back and we have enough bodies to move them on a daily basis. We will continue to utilize the Driving range mats until the turf starts to consistently grow and we have enough staff to begin the weekly task of filling divots with our sand/seed/fertilizer mixture.
-Water has been turned on to the Heritage shop and will be turned on to the #7 tee bathrooms later this week after we fix a small leak and clean the rooms.
-The trees blown down from the wind storm a few weeks ago have been cut up and removed from the course. All that remains is their old base.
-The native rough areas have been marked out in BLUE paint and the primary rough is starting to get cut this week.
*A reminder to everyone, please keep cart traffic out of the native areas.
-The member cart barns were swept out and cleaned
-All equipment is now up and running and we are putting the final touches on our winter reel grinding and preparation. We had 10 bad tires that we limped through the fall with and they had to be changed out this spring.
-The Heritage pond fill was put back together and started up to fill the Heritage irrigation pond just in time for this rain….of course.
-We will probably try to start the Heritage irrigation system next week as the night time lows in the 10 day forecast look like they will finally stay above 30 degrees. At that point the risk of freeze damage to the hydraulically controlled satellite box system is eliminated.
-We will continue our work on sapling removal around many of the back nine tee areas. These areas have not been managed for some time and are getting choked off from air movement and light.
The Heritage course looks fantastic

Greywalls
The Greywalls crew is also just three guys right now. No turf growth, dry conditions and no golfers has allowed us to get many thing accomplished during this early start.
-Spring clean up of sticks, branches and fallen trees is complete.
-The Greens, approaches, fairways and tees have all been mowed one or two times. This removes the brown tips and allows a little extra light down to the lower green portion of the turf to help speed growth.
-Dry spring conditions has allowed us to solid tine aerify the fairways. (This is usually done later in the season because it can not be done when wet). We have also verticut the approaches and core aerified some of the front nine approaches followed by some over seeding of thin areas.
-The irrigation system was charged up several weeks ago. The very dry conditions (which ended over the weekend) had the sand based greens and tees of Greywalls wilting already. Moisture stress this time of year is fatal because the grass plants are just emerging from dormancy and have no real energy storage left to survive. This makes it three years in a row that I had to fire-up the GW irrigation early to combat wilt before the spring rains arrived.
-We are completing our spring irrigation system audit. During this process we test all of the irrigation components and make a list of repairs that have to be made or heads that need to be adjusted. We also trim around all of the irrigation heads and drains at this time.
-The large yellow birch stumps and lone Hemlock tree in decline to the right of #4 green have been removed. We started this last fall the day before it snowed and finished it up this spring. We had to dig a pretty big pit around the massive stumps in order to pull them out. The area is so wet, we back-filled with sand and packed it down with the tractor tires. After letting it settle for the last few weeks we will now get in there complete the finish grading and seed the area. This area should be back in play by the middle to late summer and will drastically improve the playability of this green complex.
-As soon as an increase in temperatures starts turf growth on Greywalls we can open up for play.

I am holding a new employee orientation next week for our five new seasonal employees, they will all be starting within the next three weeks so I want to make sure they have some sort of understanding before they begin. I will be introducing them to the world of Golf Grounds maintenance in a little Golf 101 presentation.
Posted by Craig Moore at 1:29 PM No comments:

It was nice this morning; 49 degrees - a little rain ..... then noon came along, the temperature fell about 20 degrees in an hour and the rain is now sleet soon to be snow. Got to love Mqt.
Posted by Craig Moore at 1:43 PM No comments:

We need rain, the heritage pond level usually rises in the spring. It has fallen 12 inches
Posted by Craig Moore at 8:09 AM No comments: 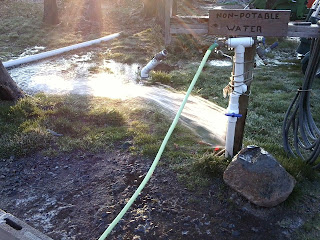 It was so cold last night our exposed wash-pad pipe froze solid and burst! We were lucky because it happened at 6:52 this morning when Mario was making coffee and we shut off the pump right away.

Posted by Craig Moore at 8:23 AM No comments:

Had to start the irrigation on greywalls today because it is so dry. No major issues.
Posted by Craig Moore at 3:27 PM 1 comment:

The Weather was cold this weekend but that did not stop many of you from enjoying the first weekend of 2012 golf. This week looks pretty good with lots of sun so come out and enjoy!

As you play around the loops you will notice that number 6 is the next green complex we chose for expansion on the Heritage. Like numbers 8 and 11 last year; our goal on #6 is to maintain the original lost green surface at the same height of cut (HOC) as our approach. We will leave it at that HOC for several years while the verdure or density of the turf stand increases. Over the next few years we will overseed with bentgrass plus we will begin to aerify and sand topdress to match the surface of the current green. (I did make a couple short video on our #12 green expansion project several years ago and put them on youtube.) Mowing lines and Heights of cut are critical elements of a design as they dictate the playability of the turf surface. Over time the original mow lines can creep in by inches a year if not maintained by a watchful eye. After 86 years inches become yards and lost pin positions, lost design intent and lost putting interest is the result.
Posted by Craig Moore at 6:56 AM No comments: